“The stock market is a wonderfully efficient mechanism for transferring wealth from the impatient to the patient.”    — Warren Buffett

The market correction that began earlier this year persisted through the second quarter, setting up one of the worst starts to any calendar year and officially ushering in a bear market.

As detailed below, most major assets classes retreated, with double digit YTD declines across all equity and fixed income segments. (Of course, the longer-term returns paint a different picture, and we encourage our investors to always “zoom out.”) 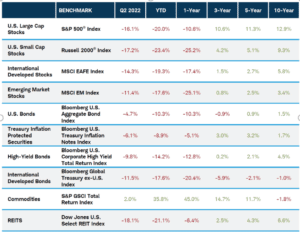 Note: Returns are annualized for periods over one year. Indexes are unmanaged, do not incur fees or expenses, and cannot be invested in directly. Past performance is no guarantee of future results.

Much of the talk has centered around Fed policy, inflation and the prospect of a recession. Many are convinced that we are already in a recession, or that one is imminent. Yet we can’t even seem to agree on what actually constitutes a recession, to the extent that the White House issued a statement just the other day in an effort to clarify. (Their official position, for what it’s worth, is that a recession is unlikely.)

During times like these, it’s natural to feel unsettled. Yet it’s precisely during these periods that opportunities – as well as risks – are most pronounced.

So, what’s an investor to do? Here are a few lessons to keep in mind as we look ahead to the second half of the year. 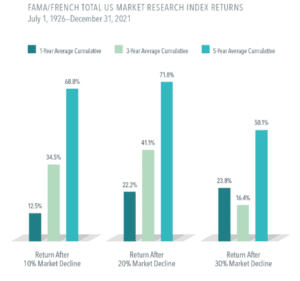 Similarly, investor Ben Carlson analyzed the worst annual returns for the US stock market going back to 1928.  He notes that if the year were to end today, it would rank as one of the worst calendar years for stocks since the Great Depression. Yet he also looked at the forward returns after markets experienced such declines, to see what happened next.

Source:  A Wealth of Common Sense

Though the one year-returns were mixed, stocks rarely fell multiple years in a row, and even the worst years (going back to the Great Depression) saw positive 5-year forward returns.

As Carlson notes, “The important thing to remember is the lower stocks go the higher your expected returns are going out into the future. Lower stock prices are a good thing for long-term investors. You just have to be patient.”

So, is now a good time to invest? This is the question many investors are asking. Though history does not repeat, it often rhymes. And as our partners at BlackRock outline below, prior years that got off to such a poor start for both stocks and bonds often ended the year with positive returns. 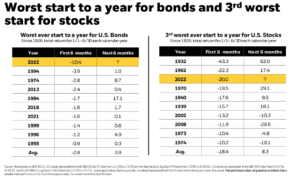 Still, I imagine many investors are wondering what to make of all the recession talk? We would urge you to consider that a recession is not a reason to sell.

Historically speaking, we are often in a recession before economists can even declare it to be the case. In fact, the National Bureau of Economic Research (NBER) may only formally declare a recession months after it has already begun, and often not until well after it has ended.

Instead, one of the best predictors of the economy is the stock market itself. Yet it’s important to keep in mind that the stock market is not the economy. Economic data is backwards looking, while markets are forward looking. As such, markets tend to fall in advance of recessions, and begin to recover well before the economy does. As noted in the chart below, courtesy of Dimensional Fund Advisors, market returns have often been positive even while in a recession!

This is a terrific reminder of the forward-looking nature of stocks. When fear and pessimism are high (as is the case today), much of that uncertainty is already reflected in stock prices. In other words, markets are anticipatory, and therefore trade not based upon today’s conditions and headlines, but upon expectations of future conditions and headlines.

We witnessed this in March of 2020, during the height of COVID, just as we witnessed it in March of 2009 during the Great Financial Crisis. In both instances, the market bottomed and rebounded even though the economic news was dismal. It was only months later that the data began to slowly improve.

This is precisely how markets operate – when the bad news has already been absorbed and priced in, investors begin to look ahead towards brighter days. It is therefore the surprises that move markets, and not the expected news of the day. Which is why we continue to stress that while a recession is possible, it’s still not a reason to sell.

Though today’s headlines seem bleak, it’s possible the market is already looking ahead and seeing relief on the horizon. Perhaps the supply chain issues are beginning to turn, and inflation – while no doubt running high – will soon begin to slowly come back down? And perhaps the Fed changes course and maintains or even lowers interest rates at some point next year? The futures market certainly seems to think that may be the case.

These are merely possibilities, of course, and we have no way of knowing what the future may bring. The leading media outlets have fared no better in matters of forecasting. (Note Bloomberg Businessweek’s take on inflation, and then note the publication date highlighted below – April, 2019.)

And so, as we begin the second half of the year, the potential range of outcomes from here is broad. We don’t claim to have any greater insight than Bloomberg when it comes to providing tomorrow’s headlines today. But we do know that the stock market is already looking out and pricing in the various possibilities, rather than trading based on the present or the past. And we remain steadfast in our commitment to do the same.

We expect this time will be no different in that regard and urge investors to maintain the patience and discipline that makes for successful long-term investing. As always, should you have any questions or concerns, please don’t hesitate to reach out.

All correspondence via mail or courier should be sent to the Hackensack office. Office visits are by appointment only. Call 201.373.2163 to schedule.

You are now leaving the website of Revolve Wealth Partners (“Advisor”) and will be entering the website for Institutional Intelligent Portfolios®, an automated investment management service made available to you exclusively through Advisor. Advisor is independent of and not owned by, affiliated with, or sponsored or supervised by Schwab. Schwab has no responsibility for the content of Advisor’s website. This link to the Institutional Intelligent Portfolios website should not be considered to be either a recommendation by SPT, Schwab, or any of their affiliates, or a solicitation of any offer to purchase or sell any security.